Enough of “frog” talk. Bores me. Save some Monkeys. 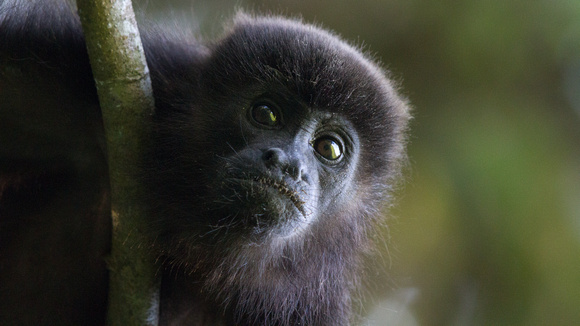 AZUERO FORESTS ARE VITAL TO SPECIES.

After analyzing the results of a study, a group of researchers reiterated the importance of conserving forests in the Azuero Peninsula to protect two species of howler monkey.

The report is from the Foundation for the Conservation of Panamanian Primates , in which they emphasize that in Panamanian territory there are two species of howler monkey ( Alouatta palliata and Alouatta coibensis ) that must be protected.

Alouatta coibensis is unique in the world and is found only in Panama.

According to the International Union for the Conservation of Nature, the species Alouatta coibensis is in critical danger of extinction.

That region was declared by the Food and Agriculture Organization of the United Nations as the most devastated in all of Panama, so the forests are in danger, affecting their diversity and endemism.

The different species of howler monkeys are being affected by the fragmentation of forests, for the realization of different types of activities (livestock, crops and human settlements) influencing their stability.

The researchers consider the Gun Gun monkey as a key species within forests, as they are pollinators, dispersers and seed activators, thus maintaining the succession and dynamics of forests.

This is where the chemical ecology of this monkey comes into effect, since the plants they consume generate different types of secondary compounds, which can have different types of functions, either ecological (attractants or repellents) or biological (medicinal) that can be useful for humans and animals that consume it.