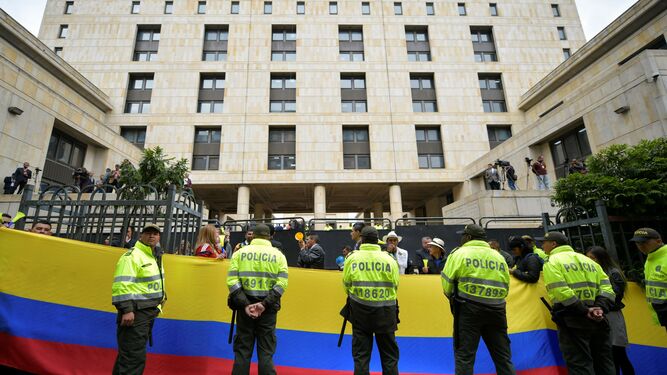 OP ED: James “JB” Bryson– As the novela that was the Martinelli trial has come to closure here in Panama, it is interesting to see that Columbia is now going through the a similar issue. One of the more popular leaders is now experiencing a judicial procedure that can certainly affect his well looked upon legacy as a leader.

Álvaro Uribe , the most popular former president and politician of this century in Colombia, is interrogated on Tuesday by the highest court in a process that could trigger his eventual trial for witness manipulation.

Uribe, who ruled between 2002 and 2010 with a hard-handed security policy as applauded as criticized, arrived at the court, in downtown Bogotá, heavily escorted and amid cries of support and rejection of a hundred sympathizers and opponents.

The investigation in the court that judges the graduates began about fifteen minutes later, a judicial source told AFP.

Beyond the unusual nature of the event, the political weight and popularity of also Senator Uribe – head of the ruling party and mentor of current president Iván Duque – make his case transcend the legal sphere and more when there are days left for local elections from October 27.

The 67-year-old right-wing ex-president faces an investigation for manipulation of witnesses in his capacity as senator, which could take him to trial for two related crimes (bribery and procedural fraud) and that are punishable by about eight years in jail.

“There is no word of mine that violates the law,” says Uribe.

Colombia thus enters a trend that has marked Latin American countries: that of popular former presidents investigated or prosecuted after leaving power and whose cases become political earthquakes. This happened with Lula in Brazil, Cristina Kirchner in Argentina, Rafael Correa in Ecuador, Alberto Fujimori in Peru or Ricardo Martinelli in Panama.

The judges who will listen to the former governor must determine whether they accuse him or release him from suspicion.

In the first case, he would face a call to trial and may even order his detention to prevent him from fleeing or interfering with the process. Any decision could take days to know.