The president of Bolivia, Evo Morales, invited on Saturday the foreign ministers of Argentina, Brazil, Colombia and the United States to visit the country to do an audit of the votes in the general elections and said that if the fraud is verified, he will summon a Second round.

Morales, in an act in the central city of Cochabamba, made this invitation following a “doubt” that the foreign ministers of those countries have about the transparency of the elections of last Sunday, October 20.

“I invite foreign ministers from Argentina, Brazil, Colombia and the United States to come, let’s do an audit vote by vote, table by table, mayoralty by mayor, department by department and I will accompany, and if there is fraud, the next day we summon the second round, “Morales said.

In addition, he added, “we never hide anything and we have never done fraud,” at the time of warning that the Bolivian opposition, in his opinion, does not present evidence on the alleged electoral fraud.

“All they want is how to harm Bolivia,” Morales said.

Suspicions of fraud arise especially from the way in which partial results were transmitted between Sunday and Monday, which initially predicted a second round between President Evo Morales and the opponent Carlos Mesa.

The publication of these preliminary data was paralyzed on Sunday and suddenly on Monday it resumed to give Morales the first round win.

Governments such as Brazil expressed that “for the moment” they do not recognize Morales’ fourth re-election and support an audit of the Organization of American States (OAS).

The United Nations, the OAS, the European Union, Argentina, Brazil, Colombia and the United States are some of the international actors that support the second round to clear up suspicions of fraud.

Cuba, Venezuela and Russia, among other political allies of Morales, ask that victory be respected in the first round.

The final one hundred percent calculation presented by the electoral body on Friday gives the victory in the first round to Morales with 47.08 percent of the votes against 36.51 of the opposition Mesa, of the Citizen Community alliance.

All week Bolivia lived a series of protests, some violent with burning of regional headquarters of the electoral body, civic strikes, blockades and marches in defense of the vote, democracy and calling for a second round. 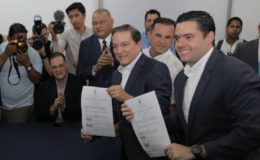 What a crock of SHIT! Carrizo says Corruption cases not on the agenda…? I wonder why? # NITOISAPUSSY

https://www.prensa.com/impresa/panorama/proyectos-anticorrupcion-no-estan-en-el-radar-del-ejecutivo/ OP ED: “JB”- My biggest regret so far this year??? Having PNO vigorously throw support around this gutless pussy of a President that continues to “talk tough” about corruption . Who succeeded handsome Satan and Porcell, and who continues to let these punk power hungry young cabinet of his …